In this 12-part series, I look at what makes each facility unique, and recount some of the key moments and stats* in the Pac-12 Era. We continue in this eighth installment with Stanford’s Maples Pavilion. 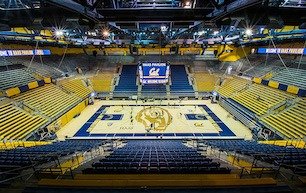 Renovated in 1999, Haas Pavilion replaced Harmon Gym which was originally constructed in 1933. The steep design of the stands and right-on-top-of-you student section creates one of the most visually appealing buildings on the West Coast.

At full tilt, the crowd noise is deafening and the home court advantage tangible.

That atmosphere held the day in 2014 when an unranked Cal Bears squad took down undefeated and No. 1 Arizona on a last-second shot from Justin Cobbs. The sea of yellow-clad fans that stormed the court that night capped a legendary game that may never be forgotten.

The victory over the Wildcats was the first time the Bears defeated a No. 1 team at Haas Pavilion, but the program is no stranger to taking down ranked Pac-12 opponents.

Mike Montgomery was responsible for two of those victories, Cuonzo Martin notched four, Wyking Jones managed to get one, and last year Mark Fox took down No. 20 Colorado in his first season.

The consistent upsets over ranked conference opponents has secured Cal its 8-11 record against the Top 25, and provided Fox with a strong recruiting pitch to focus on.

And while the Bears are 10-0 when ranked, the building has yet to be the site of a matchup between two Top 25 programs. Still, based on Fox’s first year and the recruiting momentum building, it’s likely the university cracks its way into the Top 25 within the next three to five years.

Putting aside the expectations for the new decade, the desert schools have had the most success since 2011-12. UA and ASU have posted a combined 11-5 mark and are the only tandem above .500.

Stanford and Oregon are the only other members of the Conference of Champions with winning records at Haas.

On the other end of the spectrum, the mountain schools have struggled mightily. The Buffs are 1-6 in the arena, and the Utes are only nominally better at 2-5.

But perhaps most surprising, Oregon State is winless in Berkeley since the Pac-12 expanded.

Outside the Conference, the Bears don’t have a signature win over a ranked foe. However, the victories over San Diego State, St. Mary’s, Nevada, and UNLV are nothing to scoff at. And in 2014, Montgomery led his team to a win over Arkansas in the NIT.

The elephant in the room, though, are the shocking defeats to Central Arkansas by 27 in 2017 and Portland State by 25 in the same season.