In this third installment, we scout Arizona Stadium. 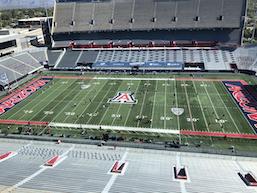 Sitting among the Saguaros of the Sonoran Desert a mere 70 miles north of the border, Arizona Stadium is the southern-most stadium in the Pac-12.

Known for its night games and semi-annual upsets of ranked opponents, the Wildcats have had varied success in its confines.

When at full capacity, Arizona Stadium is one of the loudest venues in the country.

A 6-2 mark when taking the field as a ranked team, and a 3-2 record against Top 25 Conference opponents when ranked  are some of the highlights in the desert since 2011.

But the sub-.500 mark in Pac-12 play, and 2-3 record against Arizona State, puts a damper on the success the program has had at home.

Stanford is undefeated in its two games played in Tucson since the Conference expanded, while USC, Utah, Arizona State, and Washington State each have winning records on the artificial turf.

Still, those series don’t detract from the blowout victories over ranked Oregon teams, the winning records against Colorado and UCLA, and the undefeated mark over California.

Although all but four Pac-12 programs are .500 or better at Arizona Stadium, the Cats have a win over a Top 25 opponent in six of the 10 seasons during the Era.

As the 2020s march on, the potential is there for Jedd Fisch to recapture the magic of the stadium from the height of the Mike Stoops Era and the 2014 season under Rich Rodriguez.

It’s just a matter of rebuilding belief among a fan base that has become accustomed to annual disappointment and intermittent flashes in the pan.

If Fisch can bottle that belief, the sellouts and raucous environment may just return to the desert.