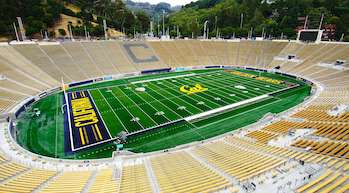 One of the oldest and most recognizable stadiums in the Pac-12, California Memorial Stadium has stood the test of time.

Built on top of a fault line, the view of the field from Tightwad Hill with downtown San Francisco in the distance is among the most spectacular in the Conference of Champions.

And although the Bears have a losing conference record in the venue, a closer look at the numbers shows Cal is a force to be reckoned with in Berkeley.

Against ranked Pac-12 opponents, Cal is .500 with five wins and five losses. And when ranked, the Bears are 1-1.

No. 11 Texas learned the hard way in 2016, and a year later No. 8 Washington State fell victim to the picturesque environment.

The 2018 season saw the program take the field as the No. 24 team in the country, and half of Cal’s nonconference defeats have come to Top 25 opponents.

But the hallmark of the team’s success at home since the Conference expanded in 2011 is arguably the Bears’ 6-7 record against ranked teams.

Yet, the Big Game is the overwhelming shortcoming. The Cardinal are 5-0 at the stadium since 2011 and haven’t lost in Berkeley since 2008. The six-straight victories will continue to haunt the program until the streak is stopped.

The Trojans have had similar success, going 5-0 since Conference expansion. And Arizona hasn’t lost in Berkeley either, posting a 2-0 mark since ’11.

But the Bears are undefeated against Utah and Colorado, while holding a 4-1 record over Washington State. At the same time, Oregon State is below .500 and UCLA is 2-2.

The potential is there for Justin Wilcox to tap into, and the steady return of students over the past few years is a positive sign.

But in one of the nation’s largest metropolitan areas with world-class public transit, a packed stadium should be commonplace. Until the environment is maximized, Cal could continue to bump up against the proverbial ceiling without breaking through.

Records at the California Memorial Stadium in the Pac-12 Era